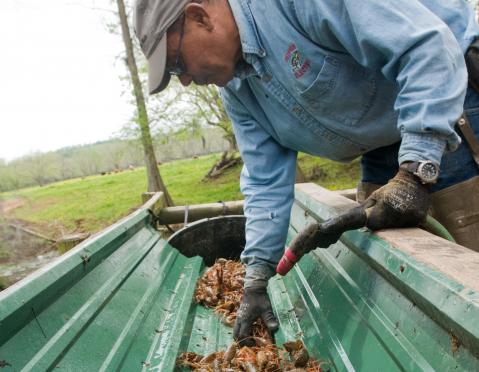 Food defines specific events and communities almost as much as icons, regalia, music, and other cultural signifiers. Maybe no place in the United States is more defined by its specific cultural heritage than Louisiana. Louisiana’s varied cultures have produced iconic foodways that have come to identify what it is to be a Louisianan. Foodways are the intersection of culture and tradition and are one of the many ways in which families, communities, and cultures identify and preserve their societies.

In Louisiana, we eat foods that originated out of the melding of many cultures and that reflect the individual interpretations of specific communities throughout our state. Many of these interpretations originated out of necessity and availability of ingredients. With the invention of canned, frozen, and fast-food restaurants, many foodways have disappeared from across the United States. In Louisiana, maybe more so than elsewhere, foodways have been kept strong and continue to define and strengthen their associated cultural traditions.

Varieties of Cajun and Creole food are common and well known throughout our country and are marketed as part of the tourist-based economy. Almost every community has a specific festival or celebration of the local foods that define the culture of that area. For example, the Zwolle tamale is a specific regional food that is celebrated with its own festival.

While certainly deserving of celebration, tamales are part of the wider food and cultural traditions associated with many small communities around Sabine parish. One such group, the Choctaw-Apache of Ebarb, have gathered together for generations to craft tamales and to celebrate their community’s blending of southwestern and southeastern foodways (Caldwell 2015). Today, more than ever, these descendants of Choctaw and Lipan-Apache cherish their family recipes and work hard to document and engender a sense of responsibility in maintaining the foodways of their people. Recently, Robert Caldwell and Dorsey Ebarb Bronson have even produced two books on the foodways of their tribe. Caldwell’s Choctaw-Apache Foodways and Bronson’s Louisiana Cooking: By Native American Choctaw Apache both document the unique aspects of their foods, culture, and stories of their community.

These surviving traditions highlight a distinct cultural resistance to overt attempts to destroy a culture through limiting access to traditional food sources, hunting grounds, outlawing expressions of cultural identity, music, and language. Additionally, these foodways point to the ways in which culture can persevere in the face of suppression.

These themes of cultural suppression and opposition can be seen particularly among the enslaved communities of the antebellum South where enslaved African and African-Americans were not allowed to express much of their previous or emerging cultural identities. Music has proven to be an aspect of cultural identity in much the same way that food has.

Drums, a communication tool as well as instrument in Africa, were banned through much of the South as slave traders and planters came to fear the power of drums in organizing slave revolts (Hester 2000, Robinson 1990). Louisiana, a decidedly more French and Spanish domain that much of the South, allowed drums until 1817 when they were sequestered to Congo Square in New Orleans, though it is likely they continued to be used elsewhere in the state (Dodson 2003). In places where drums were banned outright, the enslaved substituted hand clapping and foot tapping. Drums were never abandoned though, and from African-American communities, unique genres of music have arisen that highlight the beats and rhythms that were forged throughout the years.

Out of the rhythms and songs that enslaved and maroon societies created evolved some of the most recognizable music in the world. Hip-hop, much like rock-and-roll, at first developed separately from other American cultural institutions. Researchers trace hip-hop to the oral traditions and music of African-American communities which themselves come from the West African heritage of many of the enslaved in the South. Now part of the mainstream, hip-hop expresses a distinct cultural identity that flourished out of oppression and inequality.

Overt collective actions, such as the Cane River Insurrection of 1804, demonstrate the power of community to organize and marshal those who wish to rebel against the conditions of servitude. During the Cane River Insurrection, whistles were used to coordinate the departure of the escapees along the way. Though speculative, it is interesting to question whether whistles were substituted for drums to escape notice of overseers and other officials or if they were used because of availability.

The focus here has been somewhat broad to bring in several aspects of cultural identity and cultural fluorescence within historically marginalized communities. What ties these ruminations together though is how elements of culture persevere and flourish in environments that aren’t oppressive towards other ways of being.