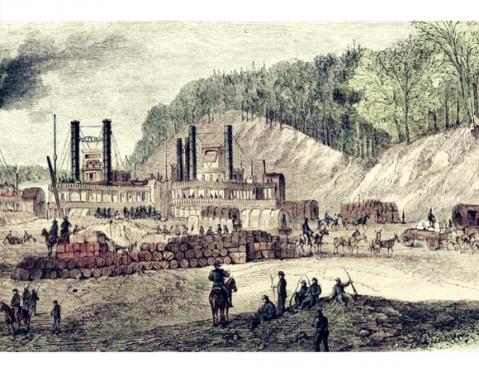 NATCHITOCHES, LA – In partnership with the Louisiana Office of State Parks and the Mansfield State Historic Site, Cane River National Heritage Area, Inc. (CRNHA) will open a temporary exhibit entitled, “War on the Red: A look at the Red River Campaign of 1864.” The exhibit will be on display at the US Army Corps of Engineers Grand Ecore Visitor Center and will feature artifacts from the Mansfield Battlefield, as well as items discovered from the Confederate and Union entrenchments located around Grand Ecore.

“At the time of the Red River Campaign in April 1864, the outcome of the Civil War appeared to be decided,” remarked CRNHA Heritage Ranger Michael Mumaugh. “The agricultural South had fought long and hard against the industrial North, but the zeal and military prowess of the Confederates was not enough to prevail against the vast resources of the North,” continued Mumaugh. The Red River Campaign, which included the largest combined army-navy operation of the war, has been referred to as the last decisive Confederate victory of the war.

Visitors will have the opportunity to view rare artifacts from the Mansfield State Historic Site Collection and the private collection of Henry V. Maggio. The large permanent display of the U.S.S. Eastport that was sunk during the 1864 Red River Campaign will also be on exhibition.

The exhibit will be on public display from March 7th to June 30, 2018. The US Army Corps of Engineers Grand Ecore Visitor Center is open Wednesday – Saturday from 12PM-4PM. For more information on this exhibit, contact Cane River NHA at 318.356.5555 or visit www.CaneRiverNHA.org.