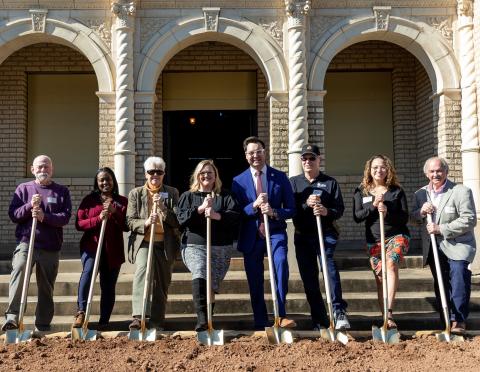 The Texas and Pacific Railway Depot was constructed in 1927 and closed its doors to passenger rail transportation in the 1960s, incapsulating its segregated entrances and waiting rooms.  Today, the structure remains one of the last segregated train stations within Louisiana and has a deep connection to the City's African American community.

“For nearly four decades the community of Natchitoches has tried to preserve and rehabilitate the Depot into a museum that depicts the stories of African Americans in Natchitoches,” remarked Rebecca Blankenbaker, Executive Director of Cane River National Heritage Area. “Today is a celebration of all those individuals and partner organizations who shared their energy and passion to see this project through,” continued Blankenbaker. Early efforts by the Cane River National Heritage Area in 2001, 2007, and 2015 stabilized the structure until a future use could be determined.

The groundbreaking marks the beginning of the rehabilitation of the Depot to house new park offices, a visitor center, and a community lecture hall/theater for the Cane River Creole National Historical Park. “We are honored to be able to tell the difficult story of slavery to segregation to Civil Rights with the walls of the Depot, where we can tell all the stories of all people of Natchitoches,” commented Carrie Mardorf, Superintendent of Cane River Creole National Historical Park.  “Since the Depot's construction in 1927, 95 years ago, the building withstood decades of use, followed by long periods of neglect, and limited repairs.  We are incredibly grateful to be a partner in this project and are excited to be the building's new stewards and tenants for the next 95 years,” continued Mardorf.

In 2019, the City of Natchitoches, who owns the Texas and Pacific Railway Depot signed a lease with the National Park Service, Cane River Creole National Historical Park granting the park use of the building as a visitor center and headquarters. “On behalf of the City of Natchitoches, we are excited to embark on this project with the National Park Service, DSW Construction, and Cane River National Heritage Area” remarked Mayor Ronnie Williams, Jr. He continued his remarks stating, “Not only will this rehabilitation project serve to spark more community revitalization efforts in the surrounding area, but also encourage economic development in West Natchitoches.”