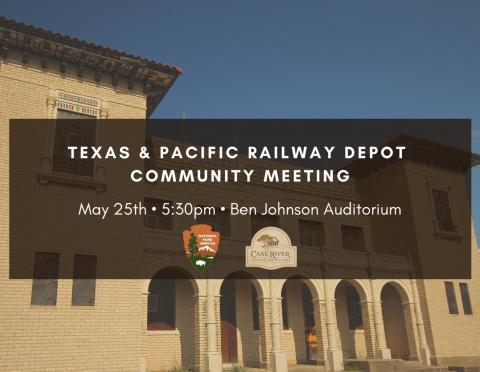 Public input is being sought to identify stories, memories, and messages from community members that should be presented to visitors at the Depot. The Depot, owned by the City of Natchitoches, has been leased to the National Park Service and will serve as the primary visitor center for Cane River Creole National Historical Park, providing visitors with information about African American history along Cane River and Oakland and Magnolia Plantations. In addition, the meeting will provide an update on the future rehabilitation of the building and begin interpretive planning for interior exhibits through a series of facilitated discussions. This meeting will be the first of several community conversations to be held this summer. Future meetings will be announced at a later date.

The Depot was constructed in 1927 during the height of the Jim Crow era and was segregated with separate black and white entrances leading to two separate waiting rooms of vastly different quality.  The structure was continuously used as a passenger station and later freight station until 1982, when it was abandoned. Today, the structure remains one of the last segregated train stations within Louisiana and has a deep connection to the City's African American community. Early efforts by the Cane River National Heritage Area in 2001, 2007, and 2015 stabilized the structure until a future use could be determined. In 2019, the City of Natchitoches signed a lease with the National Park Service granting the park use of the building.

About the national park Service. More than 20,000 National Park Service employees care for America’s 423 national parks and work with communities across the nation to help preserve local history and create close-to-home recreational opportunities. Learn more at www.nps.gov and on Facebook, Instagram, Twitter, and Youtube.